Cristiana was born on Madeira Island (Portugal) in 1989 and raised in a small town from called Camacha and ever since manifested a huge interest for the popular and traditional culture, where she integrates and dynamizes a local Folklore group.
In 2012 she concluded the Painting Graduation at the Fine Arts University of Lisbon, and her work has been seen in Portugal, Russia, United States of America and Turkey.
Cristiana has also complete her Master degree in Art and Design for the Public Space at the Fine Arts University of Porto, having already done several works in the field of mural and public intervention.
Cristiana de Sousa AKA Andorinha has exhibited individually and in collective projects, with an accentuated stamp in the language of popular and artistic nature. 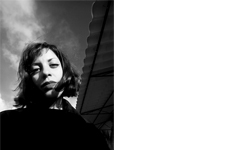